Winter canning usually does not hold a candle to summer canning when there are tons of delicious fruit and berry jams to be made. However, orange marmalade is delicious and one of the cheapest and simplest preserves you can make. One of the great things is you don't need pectin or any gelling agent since orange peels are naturally chock full of pectin. It's a bit time consuming, but one afternoon of work can provide toast deliciousness for an entire year! I used a recipe from Alton Brown on the Food Network and modified it slightly. 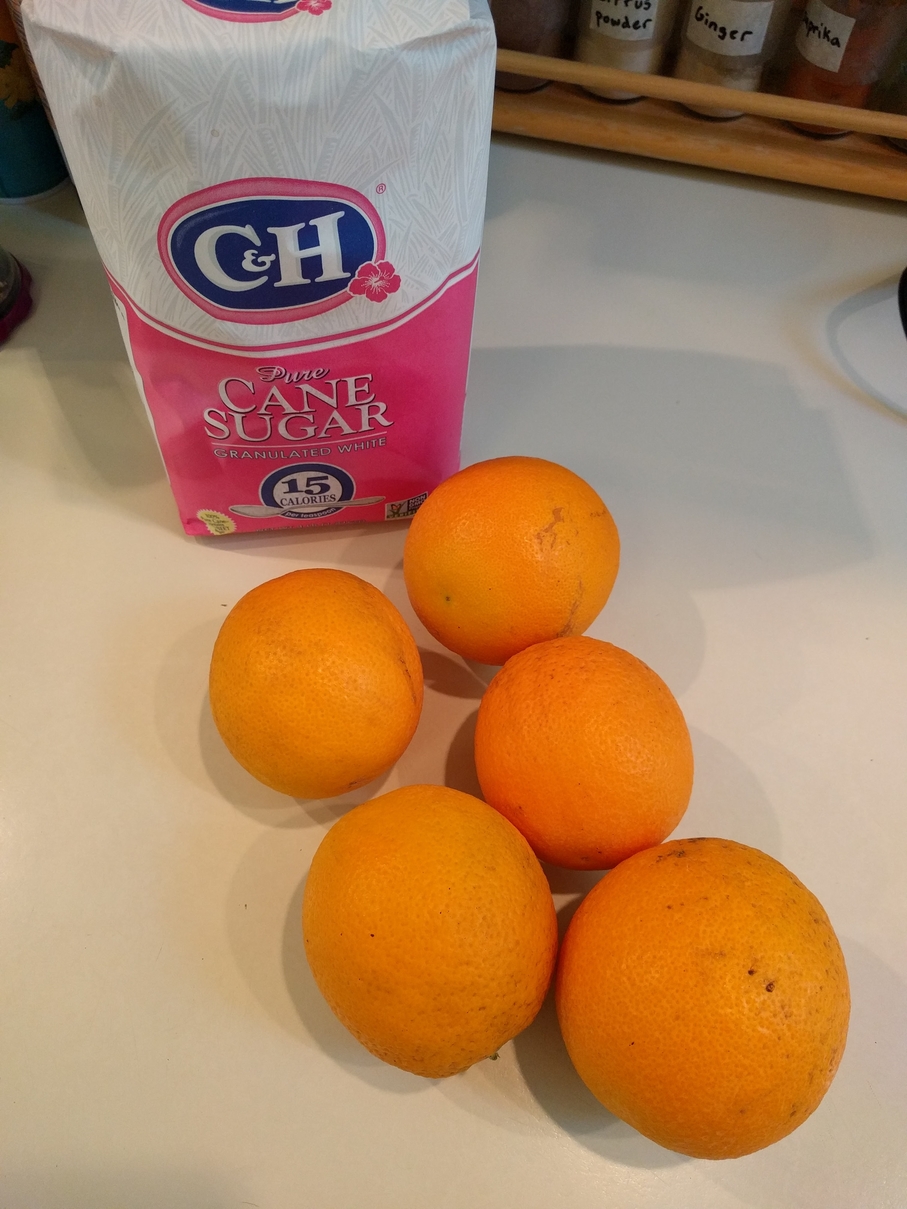 One of the things people worry most about when it comes to canning is killing the people they love with botulism. Rest assured, it's basically impossible not to open something spoiled and not realize it. Also, in my dozens of canned jars of jams, I've never had one get spoiled. I'll walk you through my favorite method of prepping jars and lids and you should be on your way.

I generally use two large pots - one huge canning pot that has a steaming basket. I put the glass jars in the bottom of the steaming basket and fill with water until they are submerged with at least an inch of water at the top. Generally, when canning, the first thing I do is start the glass jars boiling since it take a really long time to get the water up to a full boil. Once the water is boiling, it's a good idea to lower to a simmer and keep covered so your water level doesn't drop and your jars don't bang together and break. 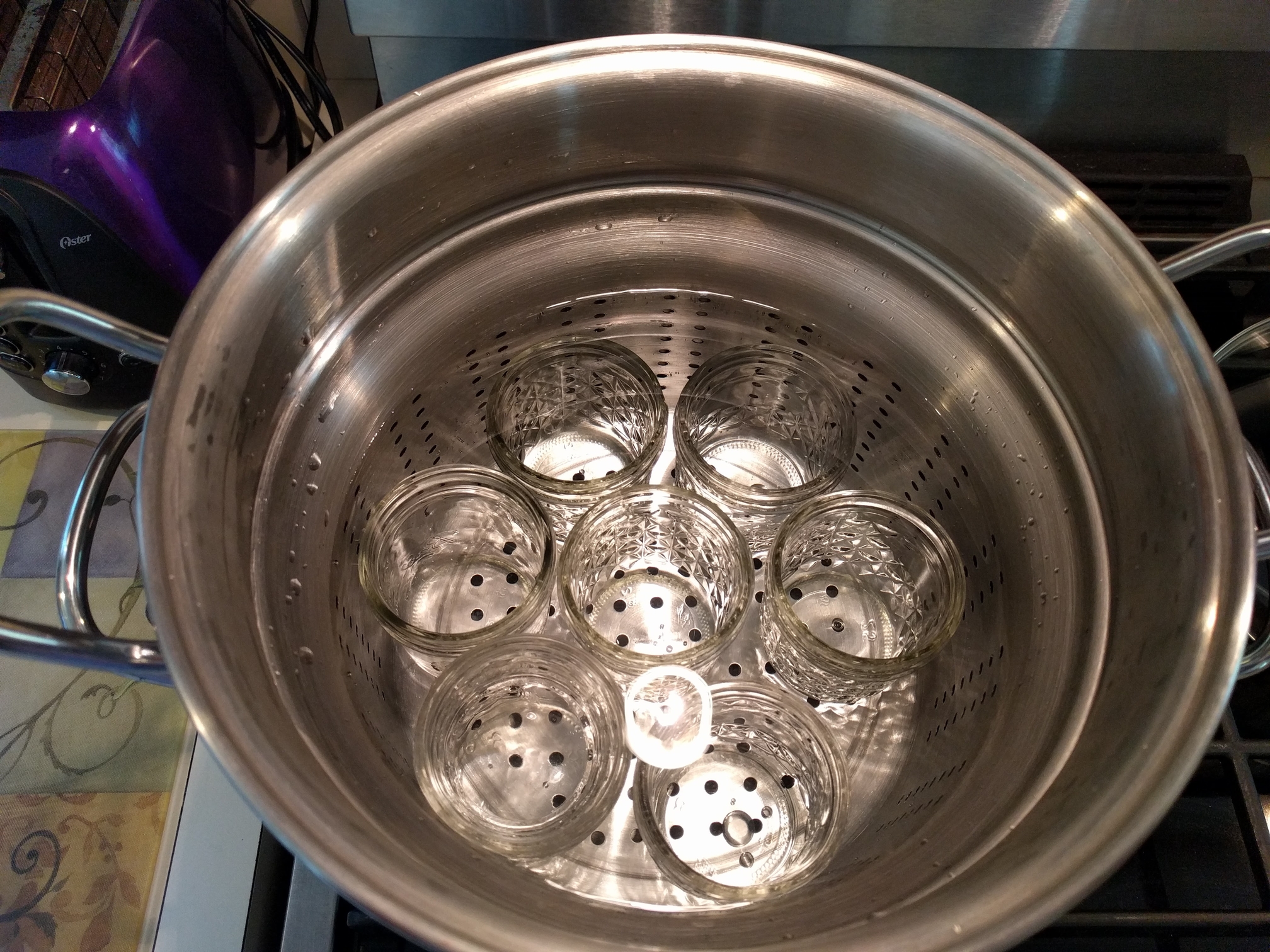 For the lids, I use a smaller pot and cover the lids and rings with water and bring to a low boil. This can be done closer to the end of your canning session. Just make sure they boil for ~10 min before sealing on. It's actually better not to let these get too hot ahead of time since you're basically trying to get the canning wax (that orange ring) soft and you don't want to melt it too much. 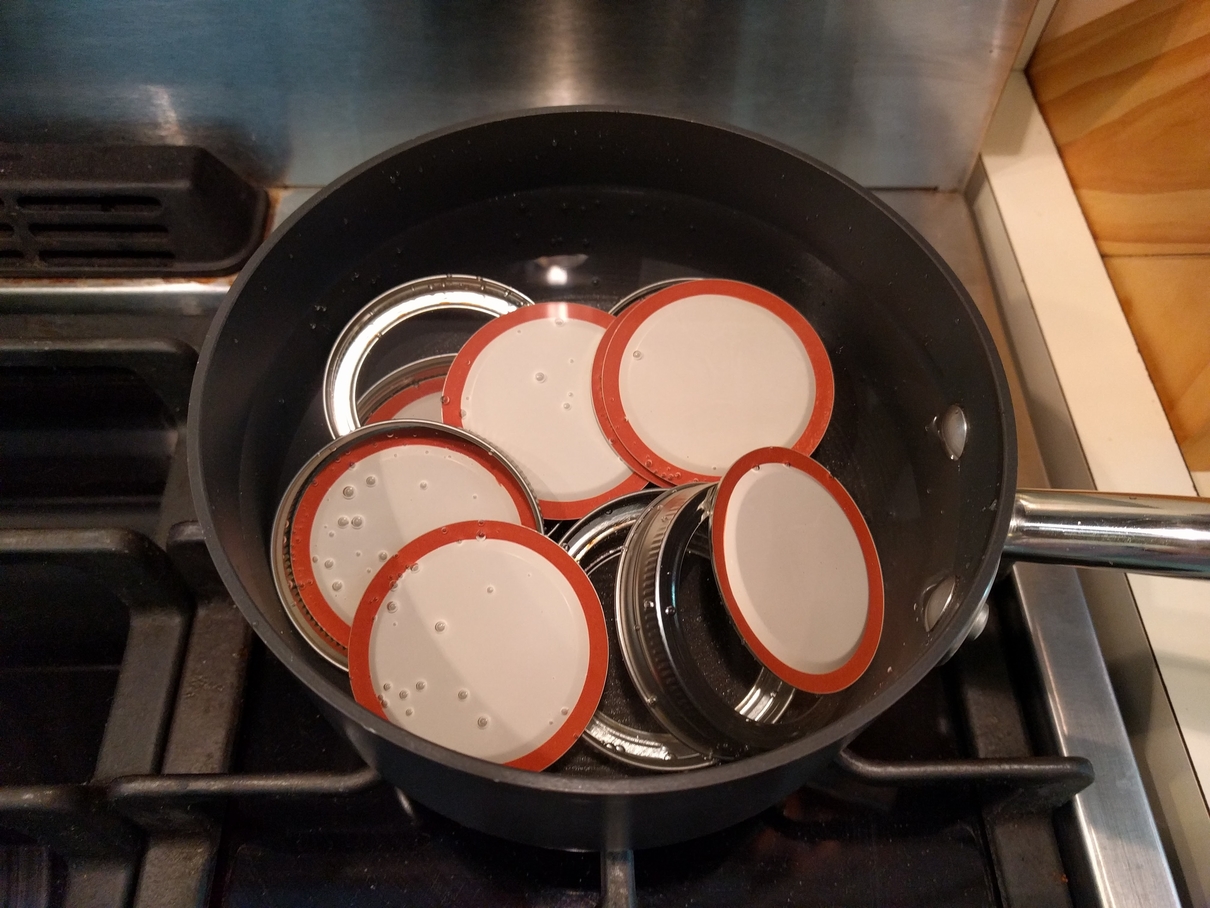 When it comes to actually cutting up the oranges, some recipes recommend a mandolin or similar tool. I find it's easy enough to cut the oranges into pieces. I generally do slices and then quarters as shown here. 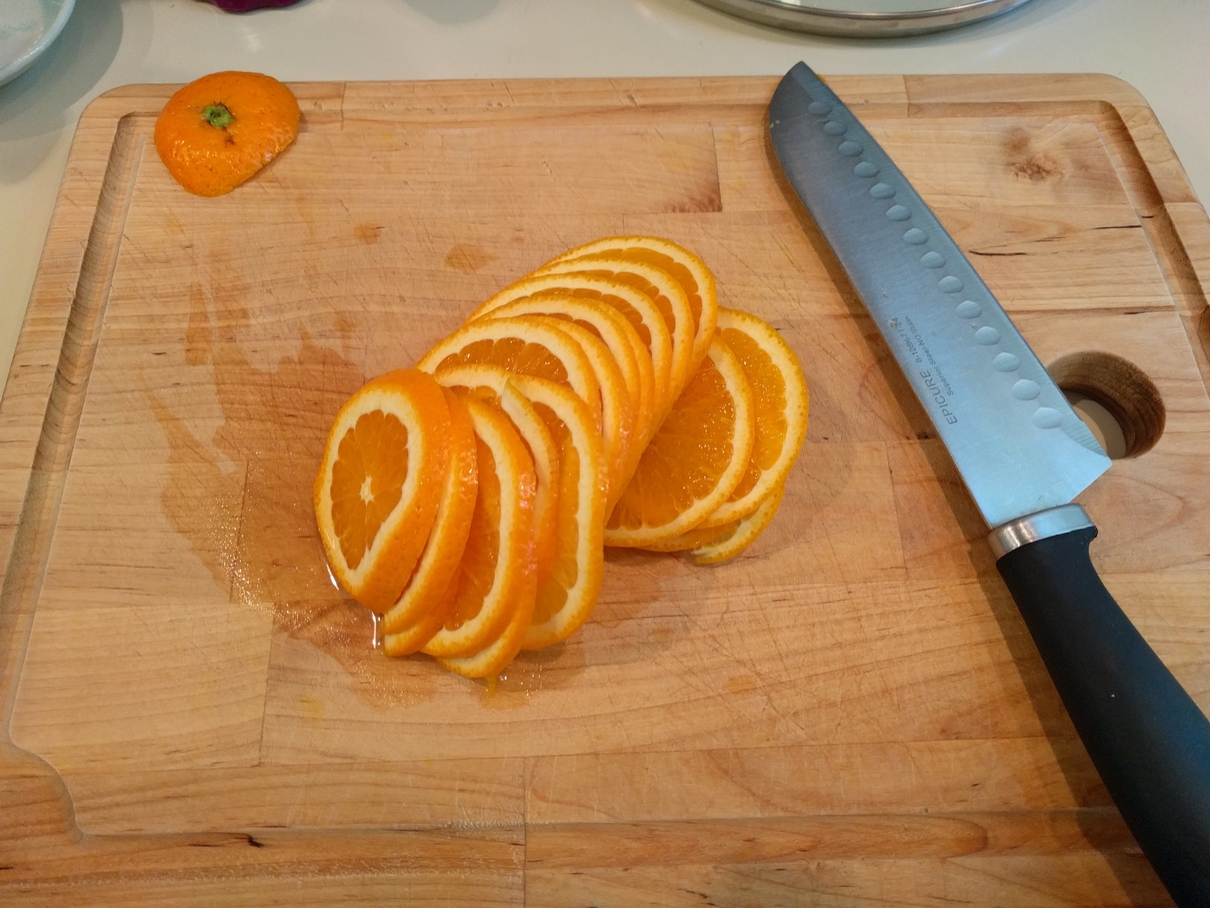 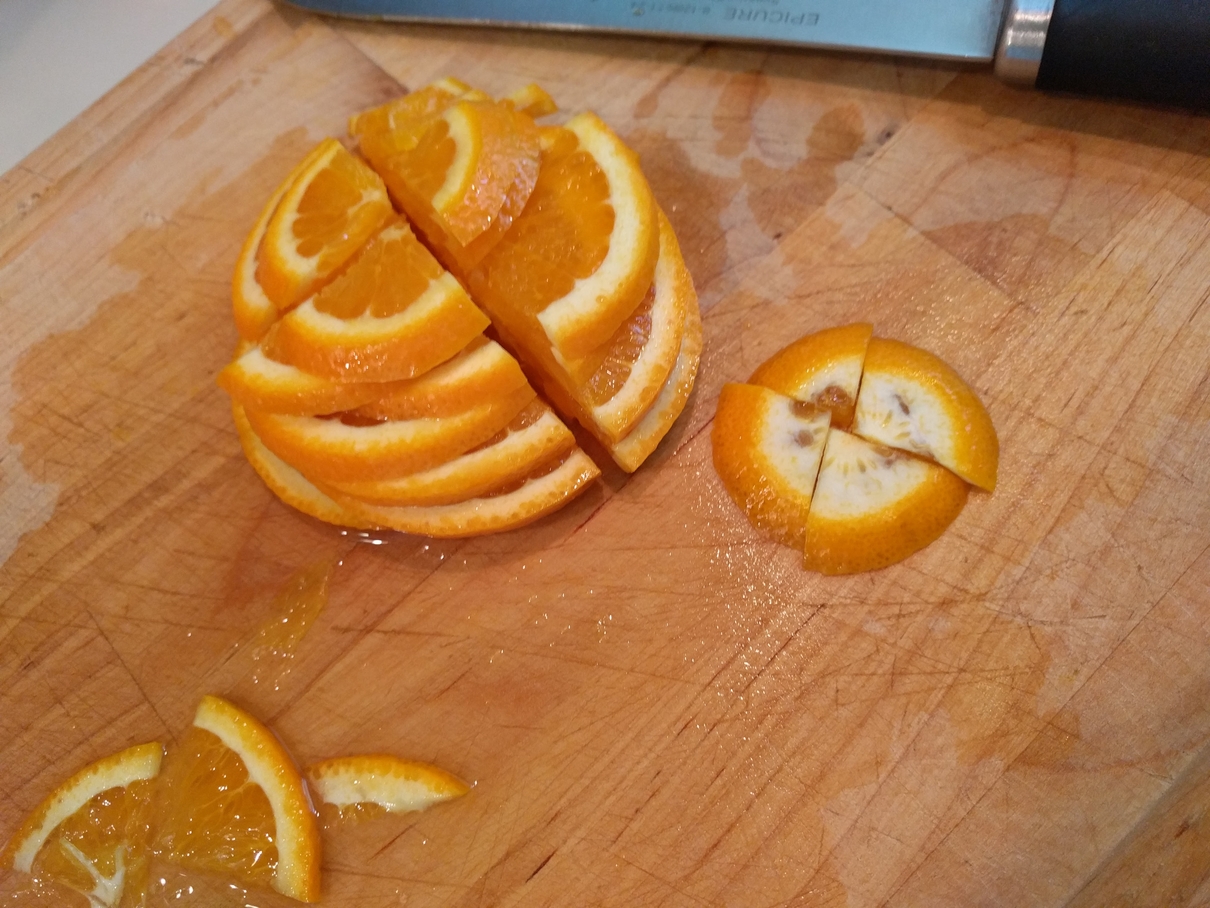 It's then into the pot with all your orange pieces, add the water and cook until they're soft. At that point, you add the sugar and boil for 15 to 20 minutes OR until a candy thermometer reads 222 degrees F OR when you place a bit of a plate just out of the freezer and it solidifies to a soft gel after about 30 seconds (basically the consistency of pudding). 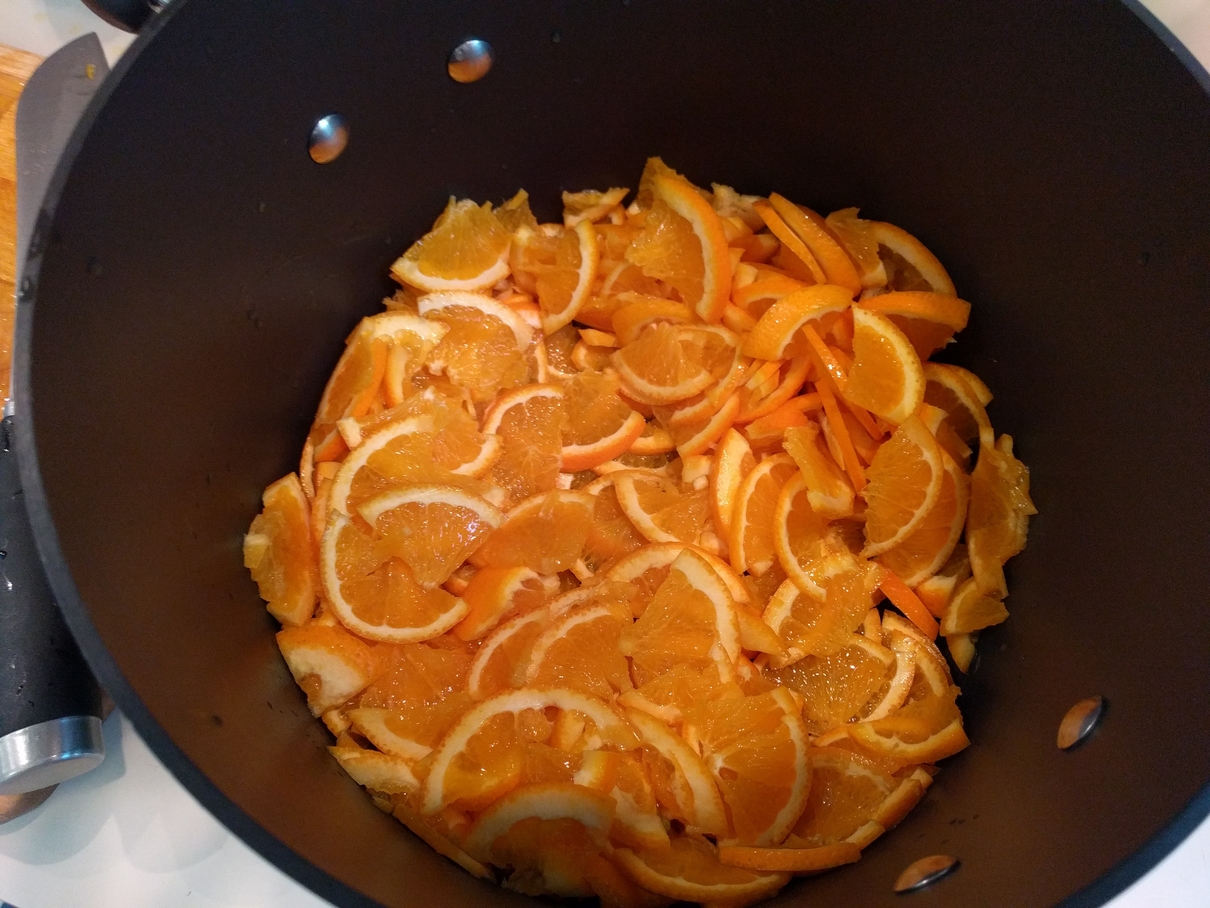 Unfortunately, I didn't take any pictures of the actual canning part because it's a rather sticky, two-hands job. However, here's the basic idea. Just before your marmalade is done cooking, lay out some towels on the kitchen counter and remove all the jars using tongs (be careful since they're obviously super hot and full of boiling water). Remove the lids and rings from your other pot as well. Using a canning funnel and a ladle, fill each jar with jam to just below the threads of the jars. Wipe off the lids of the jars, place the lids on top and tighten securely with the rings.

Place the filled jars back in the water and boil for another 10 minutes. Remove the jars and let them cool on a heat-proof surface for several hours. You can store your canned jam in a cool, dark place for at least a year. Once you open it, keep refrigerated and it will keep at least a month (usually longer). 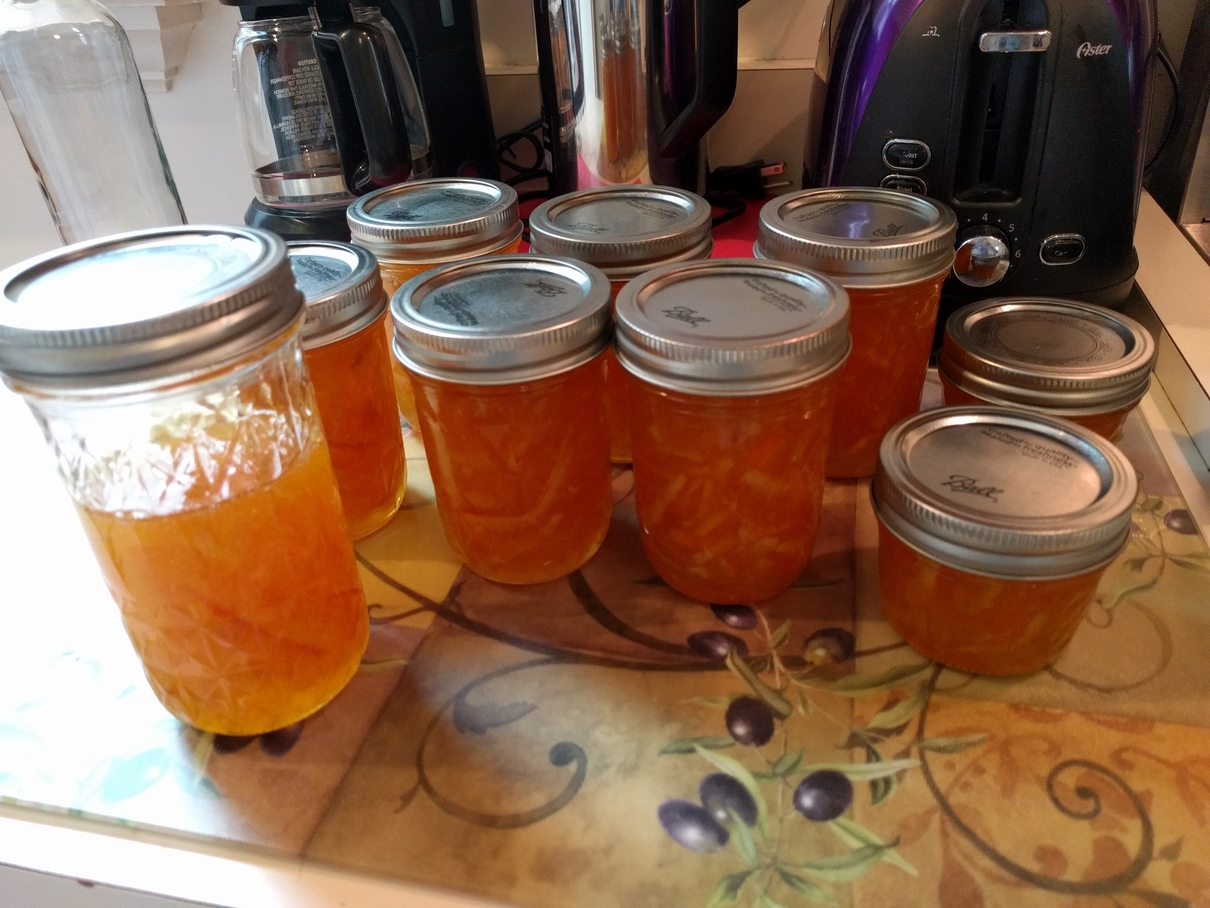 Surprise! This may look like a shortbread castle (and it is!), but this post is actually about a delicious…